OTTAWA, ONTARIO – September 20, 2016 – Thermal Energy International Inc. (“Thermal Energy” or the “Company”) (TSXV: TMG), a global provider of proprietary energy efficiency solutions to the industrial, commercial and institutional sectors, today announced its financial results for the three-month and twelve-month periods ended May 31, 2016. All figures are in Canadian dollars.​  <<Click here for a printable version of this news release>>

“Fiscal 2016 was a strong year for both our heat recovery and GEM businesses. After a disappointing fiscal 2015, our revenue rebounded, increasing more than 82% and resulting in the second most profitable year in the history of our company. Importantly, we have made solid progress in growing our base business, thus relying less on mega projects, which we define as orders valued at or above $2 million. Our revenue has grown at a compounded annual rate of 17.6% since 2009 when we acquired the GEM business. This past year, we continued to pursue client opportunities with potential for cross-selling and other repeat business, and executed a sector-based approach to our sales and marketing. While hospitals and food and beverage customers were the largest sources of revenue for the year, we continue to see applications for, and orders from, a variety of other sectors. Additionally, as we look ahead to fiscal 2017, we have a healthy order backlog of approximately $7.3 million, up from $5.9 million a year ago.”​ - William Crossland, President & CEO. 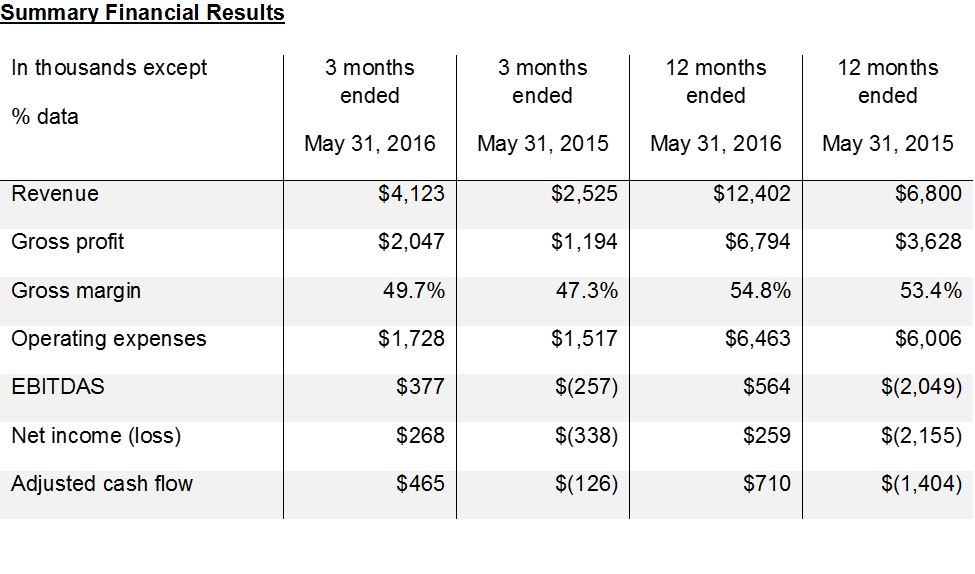 Revenue for the quarter increased 63% to $4.1 million compared with $2.5 million for the fourth quarter of the year before.  Heat recovery systems revenue increased 81.9% and included the substantial completion of installations at two major hospitals (as announced October 29, 2015 and November 23, 2015),  as well as the second half of a project at another hospital (as announced November 5, 2015), and the substantial completion of the project at an animal feed supplier (as announced November 11, 2015).  Revenue attributable to GEM condensate return systems increased 34.7% and included sales to a leading chemical producer as well as partial fulfilment of an order from a Fortune 500 food and beverage company that has already had a number of sites converted to GEM steam traps.

The higher revenue and improved margins on heat recovery projects resulted in gross profit for the quarter increasing 71.5% to $2.0 million compared with $1.2 million for the same period a year earlier. As a percentage of sales, gross profit improved to 49.7% from 47.3% for the fourth quarter of the prior year.

Operating expenses for the quarter were $1.7 million compared to $1.5 million for the fourth quarter a year earlier. The increase was mainly attributable to higher sales commissions and the payment of staff incentives in fiscal 2016, compared to the fourth quarter the year before wherein there were foreign exchange gains resulting from the strengthening of the U.S. dollar against the Canadian dollar.

EBITDAS (defined as earnings before interest, taxation, depreciation, amortization, impairment of goodwill and other intangible assets, share-based compensation expense and net write down of lease) for the quarter was $377 thousand compared to negative $257 thousand in the fourth quarter of fiscal 2015, representing an improvement of $634 thousand.

Operating expenses for the year were $6.5 million compared to $6.0 million in the prior year. The increased commissions on the higher revenues plus a staff incentive provision were the main contributors to the increase, plus foreign exchange losses predominantly from the strengthening of the Canadian dollar against the U.S. dollar. These increases were partially offset by decreases in stock-based compensation and training costs, which were higher in FY 2015 due to a bi-annual global sales conference.

EBITDAS for the year was $564 thousand compared with negative $2.0 million in the prior year, representing an improvement of $2.6 million.

The Company has net income of $259 thousand for the year compared to a net loss of almost $2.2 million in FY 2015.  Adjusted operating cash flow for the year was $710 thousand versus negative $1.4 million the year before.

The Company’s year end working capital position improved to $976 thousand compared to $488 thousand as at May 31, 2015. The Company’s net cash position (cash and cash equivalents less bank loans) increased to $1.1 million from $715 thousand as at May 31, 2015. In addition to its net cash balance, the Company also had an estimated $156 thousand of unused borrowing capacity under its bank loans at the end of fiscal 2016.

Subsequent to year end, on July 25, 2016, the Company announced that it had received an $840 thousand order from a multi-site hospital group to connect all four boiler plants at one of the customer’s three hospitals to an existing heat recovery system previously installed by Thermal Energy.

On August 8, 2016, the Company announced it had received a $750 thousand heat recovery order from one of the world’s largest beer companies.

On September 14, 2016, the Company announced it had received a $500 thousand GEM order from a new hospital customer.

The following orders, which have not been previously announced, have also been received subsequent to year end:


Including the above mentioned recent orders, the Company had an order backlog of approximately $7.3 million as at September 15, 2016, compared to $5.9 million a year ago. The Company includes in “order backlog” the value of projects in respect of which purchase orders have been received but have not yet been reflected as revenue in the Company’s published quarterly financial statements.
About Thermal Energy International Inc.

Thermal Energy International Inc. is an established global supplier of proprietary, proven energy efficiency and emissions reduction solutions to the industrial and institutional sectors. We save our customers money and improve their bottom line by reducing their fuel use and cutting their carbon emissions.  Our customers include a large number of Fortune 500 and other leading multinational companies across a wide range of industry sectors.

By providing a unique mix of proprietary products together with process, energy, environmental, and financial expertise Thermal Energy is able to deliver unique and significant financial and environmental benefits to our customers.

Thermal Energy International Inc. has offices in Ottawa, Canada as well as Bristol, U.K., United States, Italy and China. The Company’s common shares are traded on the TSX Venture Exchange (TSX-V) under the symbol TMG.