If the information below does not answer the questions you have or you would like additional information, please contact us and we will answer your specific questions and provide you with any literature that may help you.

1. What makes GEM steam traps unique?
There are many reasons why the GEM steam trap and our service here at Thermal Energy International are unique.

10 year performance guarantee
Mechanical steam trap failure rates are typically 10% annually. However, our confidence in the GEM steam trap’s quality design and engineering service is such that we provide a 10 year performance guarantee on all of our traps. The majority of our customers still have their traps installed many years past the 10 year point, with some traps outliving the plant on which they are installed.

Reduced maintenance
Due to the design of our trap, there are no moving parts to seize and fail. This eliminates the need for the traditional cycle of trap failure, identification of failed trap, and replacement of failed trap.
Engineering service & support

We provide a complete service to our customers and take responsibility for the correct specification and sizing of your traps.

Servicing and maintenance contracts can even be arranged to avoid any external intervention in the traps operation.

2. What is a venturi steam trap?
A venturi steam trap has a configured staged throat orifice especially designed to create a variable back pressure at the orifice as the load changes.  Venturi orifice steam traps, such as our proprietary GEM steam traps, have no moving parts and therefore require virtually no maintenance.

The venturi orifice designed GEM steam trap has an orifice specifically sized for the application, but following the GEM orifice is a configured staged throat especially designed to create a variable back pressure at the orifice as the load changes.  This allows the GEM steam trap to self-regulate its capacity across a range suitable for the vast majority of industrial applications. 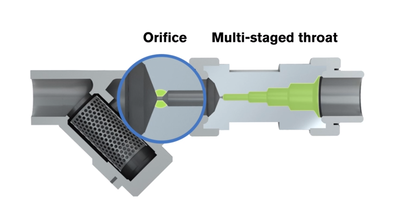 4. How does a GEM steam trap handle variable running loads, start up conditions and control valves?

Start up; the GEM steam trap discharges large volumes of cold condensate at start-up
At start up, the steam system becomes pressurised and air and sub-cooled condensate jets through the GEM Trap’s orifice unobstructed, freely discharging at two to three times maximum capacity.
​
As the system’s temperature increases, the hot condensate passes through the orifice, moving from an area of high pressure to a lower pressure one. This causes a proportion of the condensate to re-evaporate or ‘flash’ back to steam.

The flash steam created is up to 1,700 times greater in volume than the condensate. The GEM Trap’s multi-stage throat is designed to restrict the expansion of the flash steam and create a variable local back pressure which increases and decreases with flow rate.

This allows the trap to maintain a local and continuous ‘plug’ of condensate at the orifice. Live steam is prevented from escaping while the denser condensate is preferentially discharged through the trap – all without the need for moving parts.

What if my system has varying loads?
​The GEM steam trap comprises of a specifically sized orifice, followed by a configured staged throat. All GEM Traps are specially sized to accommodate the maximum operating flow rate, as determined by the heat transfer process. The staged throat allows the trap to typically operate at a 4:1 turn down ratio, this results in the GEM steam trap being able to handle variable loads.

For more information on how the GEM Trap works, take a look at our Introduction to GEM Technology animation.

5. Why are GEM Steam Traps more efficient than the alternatives?

There is no steam wasted in the operation of a GEM Steam Trap
Mechanical alternatives such as the inverted bucket or thermodynamic traps condense a portion of steam in the trap body during each cycle of operation.

The graph below shows a comparison of the steam loss at different condensate flow rates for a range of trap types. 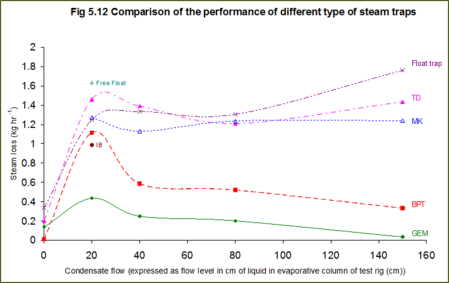 6. Why are GEM steam traps more reliable than the alternatives?
The venturi orifice designed GEM steam traps have no moving parts to wear or fail and are machined from solid pieces of high quality, corrosion resistant austenitic stainless steel with no inserts.

The 10 year guarantee on each trap reflects this quality. We have collected a large number of case studies from customers who have had our traps installed for longer than 10 years without fault and highly recommend our traps.

​7. What problems could arise with my GEM steam traps?
​GEM steam traps have no moving parts and are specially designed to prevent both erosion and blockages – the only two possible obstacles to continuous problem free GEM steam trap operation.
​
​​GEM steam traps do not corrode
​
The high quality austenitic stainless steel trap is tough and corrosion resistant. During operation a condensate seal is maintained over the orifice protecting it from steam contact and wiredraw.

We have had large populations of traps installed on high pressure steam lines for many years without corrosion or wear.
​
8. How do I maintain my GEM steam traps?
As with all other steam traps, we suggest a simple annual check to ensure optimum performance.  For the GEM steam trap, this consists of a simple filter and orifice check.

Contact us to request a servicing kit to further speed up the maintenance procedure.